Sadie is getting ready for the Super Bowl this weekend by trying on a football player uniform. Last year Sadie was content to be on the sidelines as a Puppy Bowl Cheerleader, but this year she wanted the right outfit to get in on the action. Somehow this photo shoot to show off her new uniform did not go quite as planned. Sadie kept making the funniest faces and then before we got any “nice” pictures, the camera battery died. Maybe we can just tell everyone that Sadie was purposely making weird faces to try to intimidate her opponents.

Sadie’s trying on her cheerleading outfit so that she’s ready for tomorrow’s big game – the Puppy Bowl!

This post is part of the Sepia Saturday blog hop hosted by Ruckus the Eskie and Earl’s World. 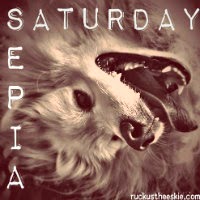