Today is the first official day of Spring! Unfortunately Sadie and I haven’t gotten to do anything fun or Spring-like outside yet because we are still dealing with the snow that fell on the last day of Winter… yesterday. I know we have some beautiful Spring flowers trying to bloom – we just need the snow to get out of the way. So this is the best we could do for a Spring photo – Sadie with the Spring garden flag that we can’t put outside yet because of all the snow. 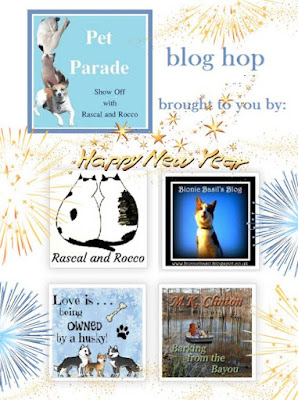 Poinsettias make beautifully festive holiday decorations at this time of year. Unfortunately for pet owners, poinsettias are also a dangerous toxin for dogs and cats. To avoid any potential risk to Sadie, I choose not to bring poinsettias into my home. Instead, I use decorations with poinsettia designs to bring some of their festive beauty to my holiday décor.

But many of you may still want an actual poinsettia plant or may receive one as a gift. This post is just a reminder to all of you pet owners to make sure your fur babies stay away from this toxic plant. Keep poinsettias well out of your pets’ reach and make sure that dead leaves/petals don’t fall onto the floor. When visiting friends or relatives with your pets, double check that no poinsettia plants are within your pets’ reach. You should even be careful during walks at this time of year, as many people use poinsettias to decorate front porches and stairs. Lastly, you need to be cautious when disposing of your poinsettia at the end of the season. Don’t just throw the plant on a mulch or compost pile that your pets can easily reach.

Click here to see which other flowering plants can pose a danger to your pets!

And to help you remember other holiday dangers to keep an eye out for, here’s a handy infographic courtesy of PuppySpot.

While out for a walk, Sadie and I noticed some tiny yellow flowers scattered in the grass. Sadie and I weren’t sure whether these cute little yellow blossoms were actually wildflowers or weeds, but either way Sadie and I thought they were a nice spot for a rest and some photos. I think this quote from Eeyore of A.A. Milne’s Winnie the Pooh sums up my feelings nicely: “Weeds are flowers too, once you get to know them.” It doesn’t matter to me whether botanists would consider them wildflowers or weeds, those little yellow blossoms brought a smile to our faces and showed us some beauty in an unexpected place.