While these photos are adorable and football related, they aren’t actually Super Bowl selfies. But true story – Sadie and I really attempted to take actual selfies in front of the actual Super Bowl!

Three years ago, the Super Bowl was held here in NJ, just ten minutes from our house. I hated the idea that such a big event was happening so close and there was nothing Sadie or I could do to see it. So like everyone else in America, we sat at home and began to watch the game (or mostly watch the commercials). But as halftime got closer, Sadie and I grew restless. I decided we should jump in the car and at least drive by the stadium to see what we could see. The stadium sits right next to a major highway that is always really crowded as it leads directly into New York City. But apparently during the Super Bowl everyone stays home, even if the Super Bowl is happening a few miles away. Sadie and I were the only car in sight as we approached the stadium, aside from the police cars positioned all along the road. We drove past and decided to turn around to be on the same side of the road as the stadium. As soon as we came back around, the lights of the stadium got brighter and I pulled over onto the shoulder. When I rolled down my window I realized that the halftime show must have just started and I could hear Bruno Mars perfectly! So Sadie, her Grammy, and I sat in the car on the side of the highway listening to the actual Super Bowl halftime show. And then the fireworks started. It looked amazing from our perspective to see the whole sky over the stadium lit up. That’s when Sadie and I tried to take some selfies, but with the bright flashes and the reflective car windows, none of them came out. I know most of America was watching from home that night, but I don’t think anyone else had a view as beautiful and unique as ours. I have to say that was by far my favorite failed selfie attempt.

This post is part of the Sunday Selfies blog hop hosted by The Cat on My Head. 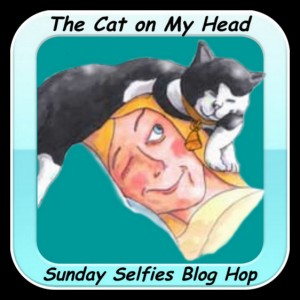