If you live in a household without any kids, than your pets may not have spent much time with children. Sadie, for example, has played a bit with one little girl whose parents work next to our office, but she hasn’t had any experience dealing with multiple little kids. But with the holidays approaching, I know Sadie will be meting a number of little relatives for the first time. So we’ve been doing a few simple exercises to try to prepare for little kid behavior.
The number one problem between pets and children has to do with rough handling. My first memories of a dog come from my Mother’s dog Pixie, who died when I was three. I remember loving that dog and always feeling safe with her. But I also remember Pixie hated my cousin, who was also three at the time. My cousin used to hug the dog way too hard and pull Pixie’s tail, so Pixie would always growl when my cousin was around. My cousin had no idea that she was hurting poor Pixie and didn’t realize Pixie was asking her to stop. This is typical behavior from children, especially kids who haven’t grown up with pets. Some kids don’t realize that you can’t treat a real dog the way you treat your dog stuffed animals.
Since many children, like my cousin, try to grab animals by the tail, our first exercise helps to get your pet used to being touched in that area. I’m not suggesting you go around pulling your pets’ tails exactly, but more handling of the tail in general would help desensitize the area. A daily tail brushing would benefit your pets’ fur, as well as getting them used to some pulling sensation in that region.
With all the running around children do, they are more likely to accidentally step on your dog’s paws. You don’t want your dog to react harshly if this happens, so it’s best to prepare him or her for this possibility. Again I don’t recommend stepping on your dog’s paws yourself, but just handle his or her paws more frequently. This is also helpful for getting your dog more used to grooming and vet visits, as their paws are usually handled in both places. Some experts suggest that lightly squeezing or pinching your dog’s toes helps to simulate getting stepped on by a child.
If you have access to a talking or crying baby doll, you can use that to get your pets used to child-like sounds. Set up the doll on a couch or chair and allow you pet to sniff it. Don’t allow your dog to grab the doll with his or her mouth, as you would not want your dog to grab onto a real child.
Because of the unpredictable nature of little kids and pets, it’s always best to supervise any interaction between the two to make sure neither the child nor the animal is acting too rough. But it’s also good to practice some sample behavior to prepare your pet just in case. That way everyone can have a safe and more relaxed holiday season.
This post is part of the Thoughtless Thursday blog hop hosted by Ruckus the Eskie, Love Is Being Owned By a Husky, and M.K. Clinton. 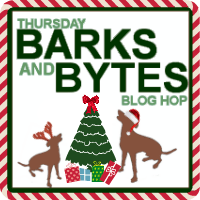